● THE UK’S LARGEST MARDI GRAS INCLUDES OVER 350 FREE GIGS, PARADES AND PARTIES WITH 100 ARTISTS PERFORMING IN TICKETED AND FREE EVENTS ACROSS THE TOWN IN THE SOUTH EAST

● WILL VARLEY, ESE & THE VOODUU PEOPLE AND MISS MELODY SET FOR THE FAT TUESDAY TOUR AND CULMINATION OF THE CARNIVAL ON 1 MARCH WITH 24 BANDS TAKING PART IN THE CROSS TOWN MUSIC TOUR

Hastings Fat Tuesday has announced further details for the 2022 Hastings Fat Tuesday Music Festival, the UK’s largest Mardi Gras and the ultimate mid-winter carnival, taking place between 25 February - 1 March. The five day town wide celebration will present over 350 free gigs, gatherings, parties and parades alongside ticketed events, with internationally acclaimed artists from across the globe appearing alongside a wealth of local bands.

The first acts of the popular Saturday Unplugged tour (26 Feb) are announced, with Danny George Wilson and the Savage 2nd Line joining the 60 local and national bands touring 30 pubs and bars throughout Hastings and St Leonards, with five Hastings New Town venues joining the tour. The day culminates with indie rock band The Magic Numbers headlining at the Brass. The band have just celebrated their 15 year anniversary with an extensive autumn tour across the UK.

Details will soon be announced for events across the middle of the festival: the Unconvention music conference, aimed at music students and emerging musicians; the family favourite Umbrella Parade an explosion of colour, music and fun as decorated umbrellas parade all along the seafront; Preservation Sunday where festival-goers gather together and the rivalry of the second line brass bands comes to a head in a dramatic play-off at St Mary in the Castle and the experimental, audio visual and electronic mash up of local underground and experimental creativity across art, film and music at Sunday Sonics at the Crypt (all 27 Feb).

The five days of festival revelry culminate in Fat Tuesday itself (1 March) a night of music across twelve venues with 24 bands playing 20 minute sets. Already announced are Will Varley, Ese & the Vooduu People and Miss Melody. Plus Fat

Tuesday’s very own reggae event, Reggae Room Party, at The East Hastings Sea Angling Association featuring a host of guest selectors on the decks and singers on the boards until 1am. And to ensure the festival goes out on a high, the infamous After Party at The Brass featuring high-caliber live music from locally renowned Buddah Triangle, DJ set from Kid Kapichi and more very special guests to be announced.

In the 12 years since its conception, Hastings five-day Fat Tuesday Music Festival has rapidly become one of the most eagerly anticipated events in the South East and further afield in the nation’s music calendar. Named the most musically sophisticated town or city in the UK, Hastings boasts a local music scene to rival many bigger places across the country. The whole area gets behind the madness, colour and eclectic musical diversity of the festival whether part of the programme or not with venues, restaurants and bars across the town wildly decorated and bursting full of eccentric, costumed party goers for the full five days. All of this has earnt Hastings Fat Tuesday a reputation as one of ‘12 best places to party in the World’ (The Telegraph).

The full line of of bands announced includes: 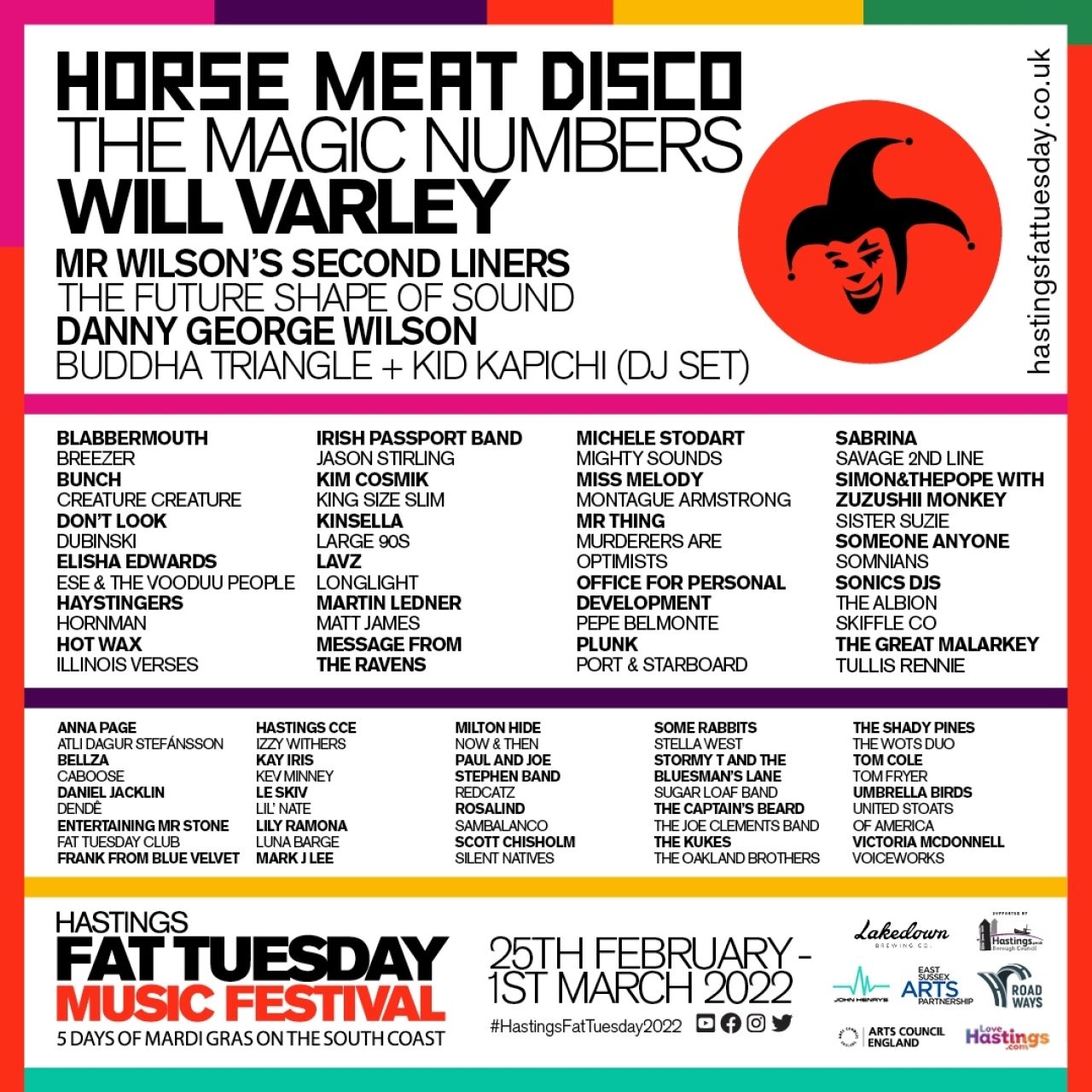